Time goes by slowly when you look at it

I have not wrote here for a long time.

Time seems slow to me.

I lost my Grinder The Cat to cancer in January.

My friend Anton was very kind to me and keep in touch and helped raise my spirits.

Grinder became ill very quickly, thought it was dental, vet said either an ear infection or worse. It was worse.

He became very sick, but never lost his appetite, ate like a horse he did.

I blocked off the house so that he would not go off to die.

He slept his last 3 nights in my arms heart to heart. Deadtv playing in the background, and skyped messages.

I took him to the vet on a Thursday, I have blocked out the date.

He did not die in my arms. He was given a small shot to go to sleep naturally, and then he was put on the table to be given the

I have his ashes, in a little white earn. He sits on the shelf with things that belonged to my friend Keith who died Jul 2007 and I

blocked that date too.

This is the last photo session Grinder the Cat posed for. I took no further photos of him, I miss him with all my broken heart. 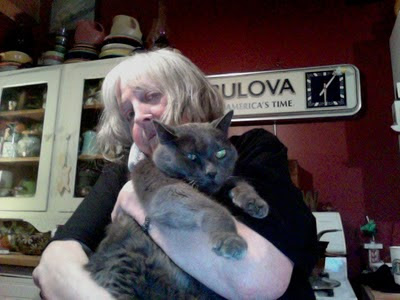