The Yellow Bittern: The Life and Times of Liam Clancy 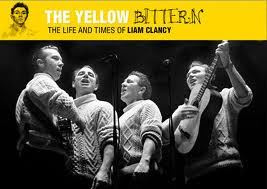 Today I just had one movie to see at 2:30. I decided to read nothing about the movie, and just in error, maybe, wore an Irish knit cardigan to keep warm. A part of this movie, a documentary on The Clancy Brothers and Tommy Makemthe centres around the stage attire, Irish white fisherman's knit sweaters as well as The Clancy's and Tommy's wonderful relaxed stage presents, and Irish Folk ballads from the rich history of that Isle.

Director Alan Gilsenan films an almost empty soundstage with Liam Clancy, on a stool, guitar on his lap, talking about his life. The story starts at his childhood and takes us on his trip from a small village in County Tipperary, Ireland to the heights of fame in America, and Ireland. Listening to Liam speak was like sitting at a party listening to the most interesting person talk, with a wonderful soundtrack, the Clancy Brothers with Tommy Makemthe playing on the stereo.

The footage of the brothers on stage is from different eras. One very interesting interview was Bob Dylan from about 1962 speaking of how, their ballads influenced him.

However there is a dark choky under taste to this movie, it builds and for me it is what I have taken home. There was more to tell and more voices to hear, but that is for another movie.

STAY at the end after to credits to hear Liam recite The Yellow Bittern. I think it is important enough to print it here.

This poem is a translation of the 18th-century poem translated by Thomas MacDonagh.

The yellow bittern that never broke out
In a drinking bout, might as well have drunk;
His bones are thrown on a naked stone
Where he lived alone like a hermit monk.
O yellow bittern! I pity your lot,
Though they say that a sot like myself is curst -
I was sober a while, but I'll drink and be wise
For I fear I should die in the end of thirst.


It's not for the common birds that I'd mourn,
The black-bird, the corn-crake, or the crane,
But for the bittern that's shy and apart
And drinks in the marsh from the lone bog-drain.
Oh! if I had known you were near your death,
While my breath held out I'd have run to you,
Till a splash from the Lake of the Son of the Bird
Your soul would have stirred and waked anew.

My darling told me to drink no more
Or my life would be o'er in a little short while;
But I told her 'tis drink gives me health and strength
And will lengthen my road by many a mile.
You see how the bird of the long smooth neck
Could get his death from the thirst at last -
Come, son of my soul, and drain your cup,
You'll get no sup when your life is past.


In a wintering island by Constantine's halls
A bittern calls from a wineless place,
And tells me that hither he cannot come
Till the summer is here and the sunny days.
When he crosses the stream there and wings o'er the sea
Then a fear comes to me he may fail in his flight -
Well, the milk and the ale are drunk every drop,
And a dram won't stop our thirst this night.