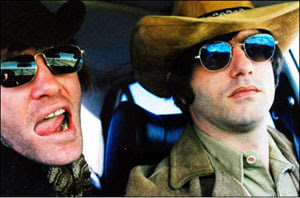 Anton Newcombe is the singer and creator of the Brian Jonestown Massacre. His music and the movie Dig are the stuff legends are made of. I missed several years in the history of this band while they were making history. They started playing about 1990 and the 1st time I came across them was this photo in the Vancouver International Film Festival film booklet 2004. The photo above was all I had to go on and decided to take Keith to see this movie Dig.

Anton lives in Berlin and is recording in a studio and broadcasting music on live TV from his living room. Anton is building a loyal base of watchers. I watch, I get up in the middle of the night sometimes to catch some of the broadcast (time difference from Berlin). The current link is http://www.ustream.tv/channel/brian-jonestown-massacre. There have been many truly wonderful moments watching DEADTV but one of the best so far is when Anton took us to The Black Angels live on his macbook. We heard and saw them play, then we went backstage into the dressing room. The photo below was taken of my computer and posted on Flickr. That is Alex singer from the Black Angels in the middle and Anton on the right taken from the live broadcast. well it was taken down today, but you can't kill the dead tv, it will rise again. I think I can hear the rock moving now. Updates soon.
Posted by bev davies at 9:43 AM