I really had no idea what to expect from this movie when I sat waiting for it to come on. I had already taken photos of the poster, and uploaded this one photo to Facebook and setting it as my profile photo. It is an endlessly fascinating photo of section of the poster. There even is Vancouver reflected into my photo on the right had side. 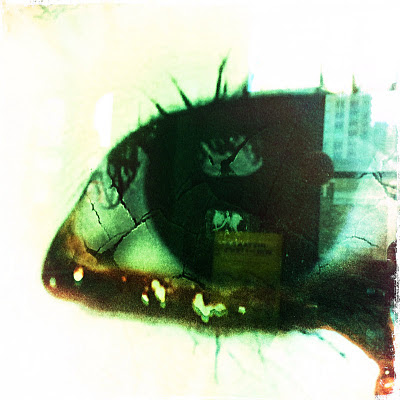 I will talk a bit about the film, and then the effect on me. The film starts with a girl group driving the fans, young girls crazy. The girl group is a signing group like Spice Girls, not a band like The Runnaways. Next the Pink Dolls came on and the audience was bored, texting, standing quiet, while these impossibly cute girls in pink lace performed. There career was tanking, management was getting ready to cut and run. They did not win the contest. Being the lead, standing centre rather than in the back is very importand to these young women, we Mick Jagger would understand.

These young girls, who quite often look alike all strive for the position on lead, even though as a band they have to the bottom of their career. They move into a news studio to record their last chance recording. Then luck changes, they find a song on a VHS tape, and hear a song, the video is blurry but the sound is a song, they song they need, with a beat so fresh, so unusual they know it will take them to heights they have never been to.

What is the price they pay?

I will not give the blood parts away. As I left the theatre I had no desire to look for tapes behind mirrors but I did wonder into a few shops looking for the pink lace and leather I had seen so often in this South Korean film.
Posted by bev davies at 12:20 PM